I am currently translating an anthology that will introduce anglophone readers to the poetry of Javier Egea, which has yet to appear in English. Egea was part of a group of Granaíno writers who came of age in the years immediately following the death of the fascist dictator Francisco Franco and weaponised the aesthetics of Spanish lyric poetry to deliver a rigorous critique of bourgeois and nationalist ideologies. 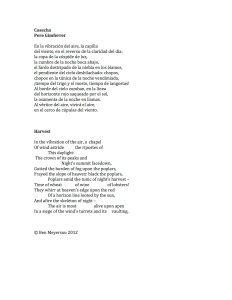